10 Things You Need to Know About Cupid’s Undie Run

Cupid’s Undie Run draws a crowd, because who doesn’t like joining undie-clad do-gooders in parading around a city while hopped up on Moscow Mules? But sometimes in the hype and hoopla people [...]

Cupid’s Undie Run draws a crowd, because who doesn’t like joining undie-clad do-gooders in parading around a city while hopped up on Moscow Mules?

But sometimes in the hype and hoopla people don’t get to see the ‘real Cupid,’ they get cold feet.

So here’s 10 things you need to know about Cupid’s Undie Run – then figure out if it’s right for you.

And no one will make you take your shirt off.  Really though. Yes, we’re Cupid’s Undie Run, but if you’ve ever seen some of our photos – people get bat$h!t crazy and wear all kinds of stuff. The costumes are part of the allure. (Hear that, cosplayers?)

And let’s be honest, I grew up a fat kid with manboobs so going to the beach, playing “shirts & skins,” or any other activity with my shirt off was a nightmare. (Confession: I’ll be wearing a onesie this year…*hides tears*)

There are also a lot of people at our event who are living with neurofibromatosis (NF) and might not feel comfortable stripping down to skivvies – and that’s okay!

Whether it’s a onesie or undies, costumes or tutu, unicorn hat or sumo suit, we want you to come to Cupid’s and wear whatever you’re comfortable with. (But still no pasties, and no thongs…) 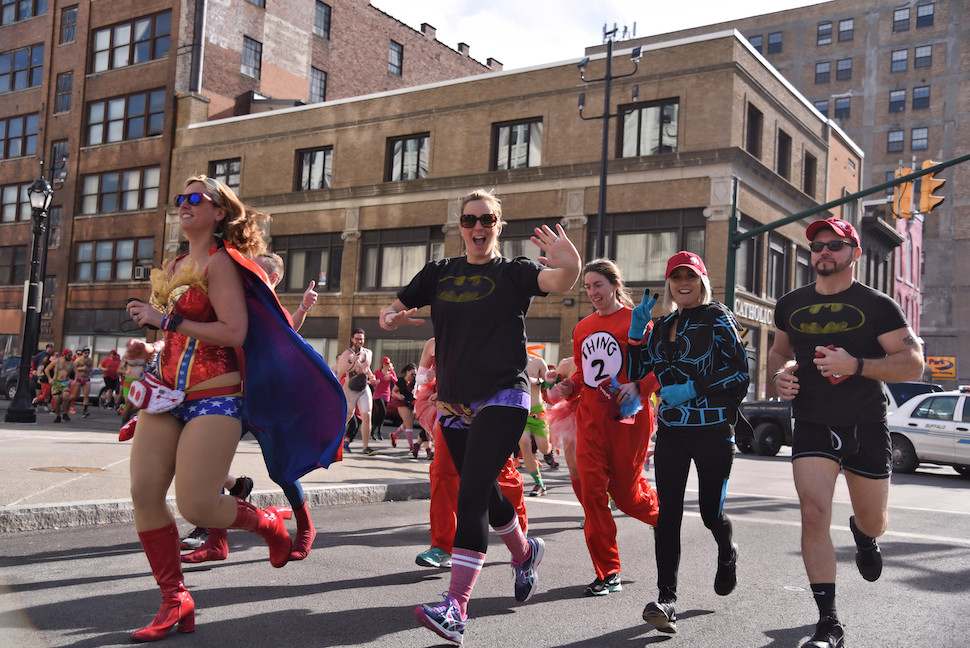 Jogging, walking, dancing or posing your way to the finish line is totally cool.  We like to say that Cupid’s is a “mile’ish” because the courses vary in length from city to city. There’s no timer, no starting gun, no race tags and we don’t declare a winner. It’s spirited much more like the 50 yard dash at Field Day…just in your underwear.

That said we do attract a lot of runners who want to add this to their portfolio, just keep in mind that the only medals we give are for the top fundraisers – because ultimately we’re doing this to cure NF!

Everybody, every body, and all fitness levels are welcome at Cupid’s Undie Run. You might’ve seen some ripped sexy people in our ads (they’re probably assholes, jk) but the reality of Cupid’s is that men, women, thick and thin, young (21+) and old come and have a great time.

We also sometimes meet people who have disabilities who don’t want to come to the “run” but are stoked when we tell them they can join the party and participate in as little or as much as they want. No one has a cattle prod at any of our events.

The goal of Cupid’s is raising money to cure NF and having fun in the process. Whether a mile is your warmup, or your stretch goal to the donut shop – we want you to come to Cupid’s and blow the roof off this B!tch!

Like we wrote above in items 1 – 3, Cupid’s is a come-as-you-are event. You’re not timed on the run; people sometimes walk, or if it’s too cold stay inside the whole time. 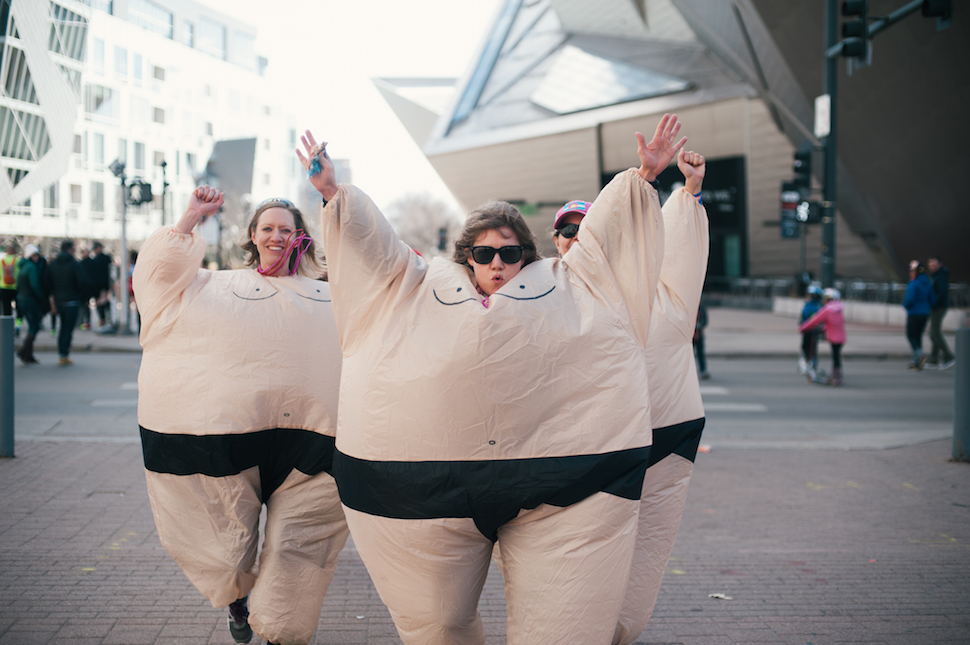 Literally. Cupid’s Charity (the team behind Cupid’s Undie Run) is made up of a small national team and countless volunteers across the country.

Many of the national team and most of the volunteers are connected to neurofibromatosis because a son, daughter, brother, sister, mom or dad has it – and in some cases the person working with us has the NF.

Because of this, we are deeply dedicated to everything we can to make our events successful and bring in vital research dollars.

We are serious about science. The net proceeds of Cupid’s Undie Run is donated to the Children’s Tumor Foundation and specifically earmarked for research.

Since we started in 2010, we have seen the number of NF drugs in clinical trial go from ZERO to SIXTEEN. Cupid’s is making waves in the NF world, and we couldn’t be happier.

We treat Cupid’s like a giant family, and it means the world to us when we see a clinical trial reducing a tumor in a little boy, for the first time in his life. That’s why we’re doing this. That boy and his Mom believe in what we’re doing – and we’re grateful for their trust.

Rally the squad for this one. Maybe you and I are different, but standing by myself in my undies in a bar is not my idea of a good time. Now throw in my squad, hook us up with open bar because we’re awesome fundraisers and team builders and I’d say that’s one of the best times you’ll have all year.

When you sign up a friend for Cupid’s, you get $15 towards your awesome incentives and they get 15% off their registration. Everyone wins! 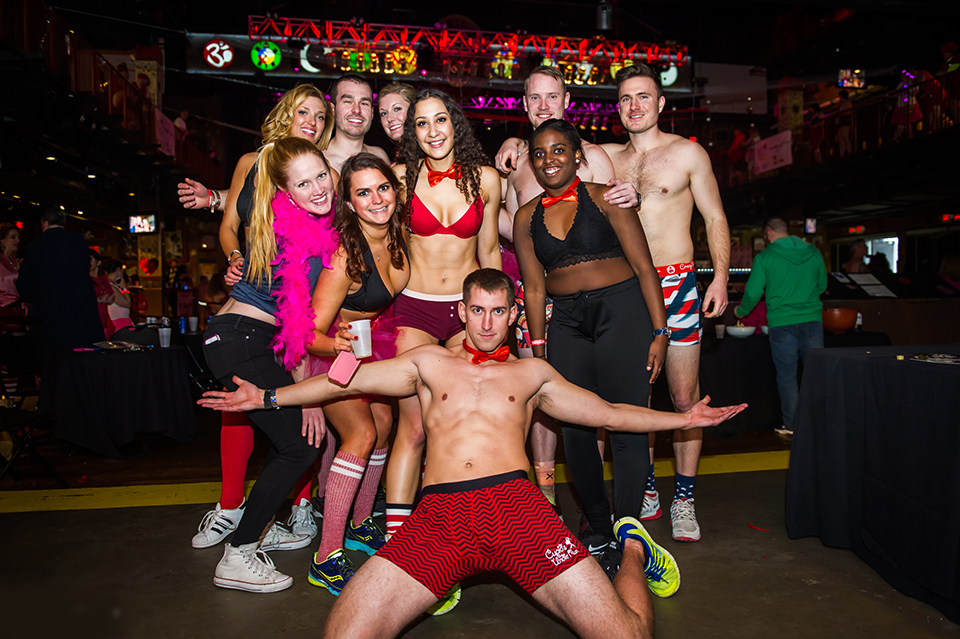 Cupid’s has survived Polar Vortex, El Niño, Snowmaggedon, Miley Cyrus and everything in between. We know it’s cold in some cities (really cold) and we know in some cities it’s 80º and sunny (F#CK YOU MIAMI).

At every event, we monitor the weather and specifically wind chill – and make the call if it’s dangerous for our crew to do the run. If you know it’s freezing, refer to item #1 and wear a onesie, tutu, bathrobe, cape, “Dude” cardigan or whatever you want. This isn’t Boot Camp.

We take this very seriously. You get rowdy, black-out drunk, puke-drunk or wanna grab any body part that doesn’t belong to you – you’re out, no questions asked. That includes consensual activity – keep that on tindr, grindr, light sabr or whatever you kids are doing these days.

Cupid’s first and foremost is a charitable party and everyone there needs to be respected. Anyone encroaching on someone’s else’s ability to have fun is dunzo.

There are a lot of NF-focused charities out there that have different, venerable missions. Some focus on patient care, for instance when someone is diagnosed they will be the first voice to say “it’s okay, we can walk with you through this.”

The Children’s Tumor Foundation focuses primarily on research – finding a cure. Cupid’s was originally a program as part of CTF, and we grew so big we became our own entity.

CTF has been a four-star rated charity from Charity Navigator for so long, that it essentially puts them in the top 2% of most effective charities in the country.

Like we said in #5, we are a family heavily affected by NF and we think CTF is the best chance we have to find a cure.

SO WHADDYA SAY? THINK YOU MIGHT BE READY FOR CUPID’S UNDIE RUN?